Rachel James, the founder of cruelty-free nail polish brand Pear Nova, is an advocate for being loud. In 2009, her sister Nova and her 10-month old daughter Ava were murdered by her ex-boyfriend after she tried to end the relationship. Since then, Rachel has been supporting Break The Silence against Domestic Violence efforts to break the chain and help women leave dangerous home environments.

When I was 20 years old, my boyfriend shoved me into a doorknob. It was something I had to sit with for a few days before I could understand what happened. Believe it or not, the progression was subtle. Discussions that turned to heated arguments, moments where he tried to control where I was going or even what I wore. It was behaviour I didn’t see coming, so I made excuses for it. Until that day, I had been keeping the truth about my relationship to myself and according to national data, I wasn’t alone. 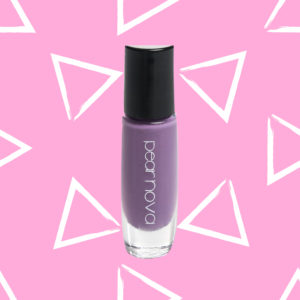 Only 1% of domestic violence cases get reported to the police, leaving masses of women and men trapped in situations they can’t get out of. There’s a rationality that happens. Some might feel like I did, that there was a perfectly normal explanation for why their partner was hurting them.

This year, Pear Nova and BTSADV are joining forces this month for Domestic Violence Awareness Month. All month long, Pear Nova has been donating 10% of their proceeds to BTSADV which goes towards funding their volunteer-led resources to help women rebuild after trauma.