Liesl Tommy, who was born in Cape Town, was unveiled as the film’s director for Trevor Noah’s biopic-Born a Crime.

She was raised during the apartheid era, and was racially segregated because she was a non-white citizen. Her family moved to Massachusetts, U.S., when she was 15 years old and she attended Newton North High School. While in high school she states that she found a common language and purpose through theatre and made that her main focus.

Tommy’s training as an actor has influenced her directorial style, particularly the way that she runs her rehearsals. Tommy explained her directing philosophy: “My job as a director is to drag that story and drag that audience along for a ride they’ll never forget. I don’t care about having a signature. I just care about how to make the story as rock and roll as possible and as thrilling as possible. I do have a strong point of view, and there are certain things I explore over and over again in my shows, because there are things I’m working through as an artist.”

Tommy is super elated as she tweeted:

It didn’t take long for Kenyan actor, Lupita Nyong’o to share a gushing post explaining her own delight as well: 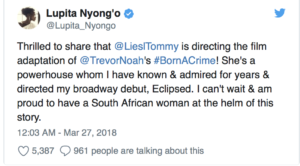 Nyong’o  will be playing Noah’s mother in the film based on his autobiography, Born a Crime – is not the only person excited to be part of the team.