Femicide is the intentional killing of women because they are women and it’s on the increase in most countries of the world in varying degrees. Honduras is known as one of the most dangerous places to be a woman.

They say that women there are not valued as anything and the police say that women are the most disturbing casualty that abounds. Honduras has one of the highest femicide rates in the world. One woman is murdered there every 16 hours.

In Germany assaults on women have risen steadily in the past 5 years by 5 per cent nationwide and in 2020 femicide was the cause of death of 139 women. Every 2.5 days women are killed by their domestic partners there.

There is one attempted murder each day, and 3 women are killed every week by a former or current partner. Germany has one of the highest rates of domestic killings in Europe.

Being a woman in Mexico is an active act of resistance in order to stay alive according to some Mexican women. 10 or 11 women are killed per day and rape is recorded by the thousands daily. They are calling it a pandemic and many females have taken to the streets to protest in recent years.

Mexican women started the ‘A day without us’ campaign where women quit work and took to the streets with banners to protest. They acted as if women had disappeared for the day in order to demonstrate the consequences.No women were found at the workplace in a bid to try to force men to see how big the problem was.

In South Africa, women are killed every 3 hours. South Africa is not a safe place for young women according to reports from several South African women. South Africa’s femicide rate is 5 times the global average.

In 2019 women in South Africa, Uganda and Nigeria took to the streets in order to protest femicide and demand change.
The international association of female lawyers is insisting on the enforcement and implementation of all legislation related to gender-based violence in Nigeria.

1 in 4 Nigerian women experiences domestic violence or rape. Most recently in Nigeria, a female musician was killed by her husband and several young ladies at school and universities have been raped and murdered over the past few years.
The penalty for the men in each of these countries is light. Women are urging the government to issue more severe penalties to offenders.

During the covid 19 lockdown, a 48 per cent increase in domestic violence was reported in Nigeria and other countries across the world and some women took to social media in order to teach women the international sign for help – a sign that could alert others to the realisation that you are in a precarious domestic or problematic situation. For your information the sign looks like this: 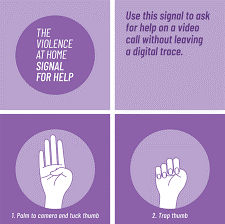 The signal is performed by holding your hand up with your thumb tucked into your palm, then folding your fingers down, symbolically trapping your thumb in your fingers. You can also watch videos that demonstrate this in more detail on Youtube.

In a world where women have come so far – from not being allowed to vote – to voting, owning bank accounts, and working as much as their male counterparts, why are women still viewed as easy prey and subject to men’s violent whims?

The sad fact is that centuries of conscious and unconscious gender bias have been propagated throughout world cultures and traditions.

Let’s go back several centuries to the story of King Henry VIII who took off two of his wife’s heads.

Whenever King Henry was dissatisfied with a wife or needed to find a woman to bear him a male child – he would conjure an excuse to divorce his current wife, have her humiliated and exiled, or have her beheaded.

The old (fabricated) story has it that when King Henry set his sights on Anne Boleyn (his second wife) she started to tease and play games with him in order to make him desire her the more.

Anne even left the court for a year in order to avoid the king.

The story that has been told over the centuries is that Anne told King Henry ‘No’ but really meant ‘Yes.’

Believe it or not, that ugly old age adage that when a woman says no she actually means yes, reared its troublesome head many centuries ago.

Today also, when a woman says ‘no’ to a man, many still tend to think she’s just playing hard to get and means ‘yes’ – a dangerous conclusion that has led to a series of violent rape and subsequent murders.

In a book called 500 years of lies by Hayley Nolan, it has been revealed that Anne Boleyn (King Henry VIII’s second wife) was not the scheming plotting fiend most historical stories made her out to be.

She was in fact quite innocent. She was very religious and would probably never have cheated. And even if she had cheated, did that warrant her head? King Henry the VIII was actually, probably a dangerous psychopath and narcissist.

King Henry grew tired of Anne as she could not bear him a son and he also didn’t like the fact that she was very strong-willed.

Does this story ring a bell? Even centuries later Queen Anne’s plight resonates with many women.

A lot of females in recent times are still terrified of not being able to bear a male child or a child at all and strong-willed women are still frowned upon.

Many women have been ostracised and maltreated because of childbearing issues or for not living up to ‘female’ or ‘wifely’ duties and expectations even by fellow women.

Mothers are overtly aware of this misplaced scale of preference and have groomed their daughters to equally (subconsciously) place men’s needs before theirs because they fear that their daughters will not be accepted in society and may have a difficult life otherwise.

Women are traditionally taught to offer themselves up as products to their male counterparts whom they will treat as consumers with superior rights over them (women).

On the other hand, a lot of young boys are coddled at the cradle-like young Princes.

They do next to nothing while their young sisters are taught to cook, clean and take care of men’s needs in order to survive.

These young boys grow into men who imagine and instinctively feel that every woman they meet should be subservient to them. That they are entitled to more privileges and rights, if not, it’s not out of place to mete out penalties or maltreatment to the said women.

The precedence of women being punished due to factors beyond their control, for overt sexuality or disobedience, has presided over the centuries. It has been condoned and we are hereby reaping the repercussions.

From King Henry the 8th of the 16th century to Jack the Ripper in the 19th century (who believed he was punishing wayward women), to the female genital mutilation in certain tribes of Africa, to kidnapping, to female trafficking and femicide worldwide in the 21st century, women continue to be victims of age-old gender bias beliefs.

One of the most important political questions for women today is how to counter these stiff old gender beliefs and eradicate the worldwide femicide pandemic that is rearing its ugly head all over the world.

To answer this question we’ve taken a look at the genesis, now let’s take a look at methods of control;

The onus is on mothers and fathers, in general, to do better – to teach their children better. It starts from the home. Parents need to promote a healthy and balanced work/life/education and a ‘safe’ environment for both the male and female children at home. Young girls need the same amount of exposure to education as young boys do and the girls should not be held duty-bound to the kitchen and to the care of the home. It should be an equal and balanced effort between children of both genders.

Young male children should be taught to respect women and to be supportive and protective of them.

The onus also trickles down to society and government.

Adequate structures and policies need to be set in place.

Severe penalties should be imposed on offenders.

The government should proffer help by means of well-equipped hospitals, female shelters, and support centres.

The psychological evaluation should be implemented to address and treat depression and emotional trauma.

Churches and religious leaders should stop telling women to pray and fast for violent men and they should also stop ostracizing women who try to escape life-threatening situations or get a divorce.

The ‘troubled’ men should be encouraged or obligated to go for anger management counsel and to seek psychological help.

The stigma society places on people seeking psychological help for mental or emotional problems should also be eradicated.

Religion is one of the many reasons women feel obliged to remain in abusive, violent or dangerous marriages and homes. Dependency, uncertainty, society’s ostracization and shame are others.

Society should try to demystify people who have gone through domestic violence.

Talk about it, start discussions, encourage conversations and report it. Spread the word.

We need to build a report based society in order to create a system of easier reporting.

Society needs to stop shaming and stigmatising women who speak up about abuse and rape.

Women, if you are going through any form of abuse, know this – You are valuable and loved and there is no shame in leaving a violent home. There is help for you.

Here are some helplines at your disposal if you are in a dangerous and violent domestic situation:

They respond as a group and in a timely fashion to the various needs of domestic and sexual violence survivors.

If you are in immediate danger call 999.

Call 3919 for victims of domestic violence.