Young black girls all over the world now have a reason to bask in the pride of being African because a young girl at some point did not give up on her dreams. Maya Angelou says “I love to see a young girl go out and grab the world by the lapels.” This is exactly what these women have done. They have had their fair share of walking on the red carpet and beaming smiles at the glaring lights of the paparazzi’s cameras. Above all they have given young black girls something to hope for and hold on to. 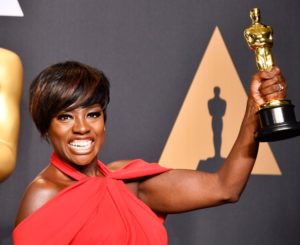 Davis was born on August 11, 1965 in St. Matthews, South Carolina. The daughter of Mary Alice and Dan Davis. She was raised in Rhode Island with three of her five siblings.Her father was a horse trainer and her mother was a maid, factory worker and homemaker.Her mother was also an activist during the Civil Rights Movement. At the age of two, Davis was taken to jail with her mother after she was arrested during a civil rights protest. Two months after she was born, her family moved to Central Falls, Rhode Island, with Davis and two of her sisters, leaving her older sister and brother with her grandparents. She has described herself as having “lived in abject poverty and dysfunction” during her childhood,recalling living in “rat-infested and condemned” apartments.Following graduation from high school, Davis studied at Rhode Island College, majoring in theater and graduating in 1988. Following graduation, she attended the Juilliard School for four years and was a member of the school’s Drama Division “Group 22” (1989–93).

Viola Davis is famous for her role in the play, Doubt where she played the role of Mrs Miller and Peter Norwalk’s How to Get Away with Murder (HTGAWM) where she starred as Annalise Keating.

As part of her Partnership with Vaseline to promote the Vaseline Healing Project, Davis attended the groundbreaking of a free community health center in Central Falls, Rhode Island in October 2016 that     was sponsored by the project.The project provides dermatological care to help heal the skin of those affected by poverty around the world. She was the first black actress to be nominated for three Academy Awards, winning one, and is the only black actor to date to win an Oscar, an Emmy, and a Tony.

Davis is a Christian and regularly attends services at Oasis Church in Los Angeles. 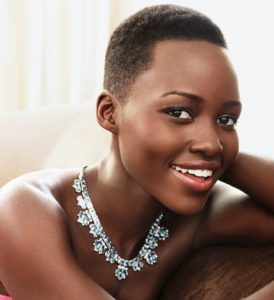 Nyong’o was born in Mexico to Kenyan parents, Dorothy Ogada Buyu and Peter Anyang’ Nyong’o, a college professor. The family had left Kenya in 1980 for a period because of political repression and unrest.

Nyong’o identifies as Kenyan-Mexican and has dual Kenyan and Mexican citizenship.She is of Luo descent on both sides of her family, and is the second of six children. It is a tradition of the Luo people to name        a child after the events of the day, so her parents gave her a Spanish name, Lupita. Her father is a former Minister for Medical Services in the Kenyan government. At the time of her birth, he was a visiting lecturer  in political science at El Colegio de México in Mexico City. He later became a senior politician in Kenya.

The family returned to their native Kenya when Nyong’o was less than one year old, as her father was appointed a professor at the University of Nairobi. She grew up primarily in Nairobi, and describes her upbringing as “middle class, suburban”.When she was sixteen, her parents sent her to Mexico for seven months to learn Spanish. During those seven months, Nyong’o lived in Taxco, Guerrero, and took classes at the Universidad Nacional Autónoma de México’s Learning Center for Foreigners.

Lupita is famous for her role as Nakia in the blockbuster, The Black Panther, starring also  in the movie, 12 years a slave as Patsey alongside, Chiwetel Ejiofor and Nakku Harriet in Queen of Katwe.

In June 2015, Nyong’o returned to Kenya and announced that she will advocate globally for elephants with the international conservation organization WildAid, as well as promote women’s issues, acting and the arts in Kenya. WildAid announced Nyong’o as their Global Elephant Ambassador.

Nyong’o is involved in the organization Mother Health International, which is dedicated to providing relief to women and children in Uganda by creating locally engaged birthing centers. She said she’d never thought much about birthing practices until her sister introduced her to MHI executive director Rachel Zaslow. Nyong’o felt bringing attention to such important but overlooked issues is a mandate for her as an artist. 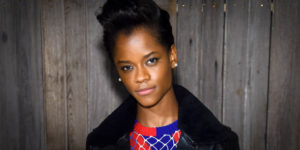 Letitia is a Guyanese-born British actress. Wright’s interest in acting was inspired when she saw Akeelah and the Bee and found the lead, Akeelah Anderson (Keke Palmer) to be a positive role model.       Determined to act, she sent emails to different agents about her acting experience until she was picked for small parts.

She is famous for her role as Shuri, Tchalla’s 16 year old sister in the Black Panther movie.

Beginning in 2011, she has played in roles in several British TV series, including Top Boy, Coming Up, Chasing Shadows, the Doctor Who episode “Face the Raven” and Black Mirror episode “Black Museum”.

Wright has been vocal about her struggles with depression. In 2018 she told Vanity Fair, “I was in the dark going through so many bad things, when the world didn’t know about Shuri and Letitia and whatever is happening now.” Wright took a break from acting until 2015 after she encountered Christianity at a London actors’ Bible study. She explained, “I needed to take a break from acting, because I really idolized it. So I came off from it and I went on a journey to discover my relationship with God, and I became a Christian.” 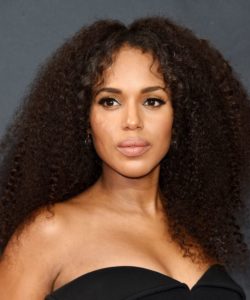 Washington was born in the Bronx, New York City, the daughter of Valerie, a professor and educational consultant, and Earl Washington, a real estate broker. Her father’s family is of African American origin, having migrated from South Carolina to Brooklyn. Her mother’s family is from Manhattan, and Washington has said that her mother is from a “mixed-race background but from Jamaica, so she is partly English and Scottish and Native American, but also descended from African slaves in the Caribbean.

At age 13, she was taken to watch Nelson Mandela speak at Yankee Stadium upon his release from prison. She attended George Washington University, graduating Phi Beta Kappa in 1998 with a double major in anthropology and sociology. She also studied at Michael Howard Studios in New York City.

She is known to have starred in movies like; Django Unchained, Little Man, The Last King of Scotland, Save the Last Dance and How to Get Away with Murder as  Olivia Pope.

She is a member of the Creative Coalition; which is a board of actors, writers, musicians, and producers that explore issues that are at the forefront of national discourse. She is also a member of V-Day, a global movement that brings awareness to violence against women and girls.