Aisha Gombi Bakari, is a 38-year-old Northern Hunter who is dedicated to fighting the Book Haram insurgence in the north-eastern part of Nigeria. She controls a local band of hunters who help the Nigerian Military track and capture the Book Haram Sect. 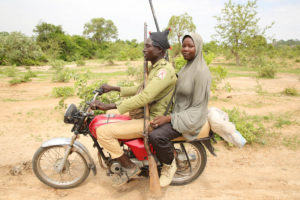 Also known as Boko Haram Huntress or Queen Hunter, Aisha can be likened to Queen Amina of Zaria the first Northern Woman to become the Sarauniya (Queen) in a male-dominated society. Known for her bravery and courage, Aisha decided to join the army and help combat this insurgence group because of how they killed people, damaged properties and destroyed villages.

For over seven years, people in Nigeria’s north-eastern states have lived with the harsh realities and impact made by this sect. So far, about 20,000 people have been killed and over 2 million Nigerians displaced.

Aisha’s husband says he is proud of what she does. However, he is majorly concerned about her safety but still wishes her success on the part chosen. 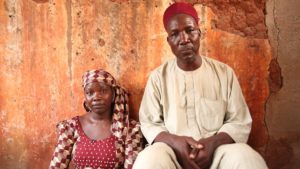 Finally, Aisha pleads with the Nigerian government to provide them with more arms in order to help make their fight against Book Haram more effective. But even at that, she has vowed not to stop on her mission to root out Book Haram from Sambisa Forest.