The African continent is the real epitome of rich cultural diversity with about 54 countries and countless different cultures. Some cultures or ethnic groups take delight in showcasing Africa’s unimaginably creative talent while others influenced by religion, give visitors the opportunity to gain knowledge of the beliefs on which a country’s culture is built. Here are a few out many beautiful and interesting festivals in Africa;

Widely known as “Africa’s Biggest Street Party”, Calabar Carnival festival is a popular celebration in Nigeria which was created as part of the strategy of making the Cross River State, Nigeria, the number one tourist destination for Nigerians and tourists from all over the world. From every 1st of December until 31st December, the colourful mood of celebration in Calabar is seen and felt and this has boosted the cultural mosaic of Nigeria people while entertaining millions of spectators within the state, outside the state and foreigners, and as a result, serves as a booster in the tourism industry for all stakeholders. Apart from creating the perfect platform from brand visibility for consumer and market awareness, this carnival has also successfully showcased the local heritage and culture of the people while at the same time, strengthening the capacity of the locals to participate in an economically beneficial way. 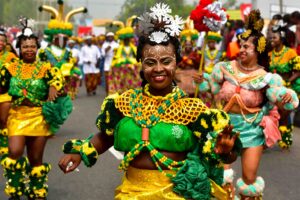 This has to be one of the most fascinating cultural experiences a traveller can experience. Each year, the nomadic Wodaabe tribes gather at the end of the rainy season, usually during the last week of September, for what has been described as the world’s most competitive male beauty pageant. During this one-week Festival, tribes gather via camel or donkey and even on foot to come together to dance, feast, and most importantly – attract a lover or mate. The men carry a small pocket mirror with them at all times and spend hours preparing their clothing and makeup for the Yakke dancing – in which three female judges each pick a winner who will be famous for years. The Wodaabe are polygamous, and it is the women who take the lead in partnerships. During the dance, a woman who wishes to be ‘stolen’ from her current husband by a more attractive mate taps him on the shoulder to indicate her choice. Witnessing the Gerewol festival is a rare opportunity for travellers to explore cultural horizons. 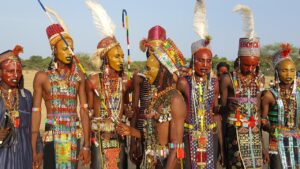 This festival is held every year in the coastal town of Essaouira, and was founded more than 20 years ago to celebrate traditional Gnaoua music, which draws inspiration from the religious songs and acrobatic dance rhythms of Berber, African, and Arabic culture. Since then, it has grown to include musicians from all over the world. The festival lasts for four days, with performances taking place at venues all over the town. Essaouira is also known for beautiful beaches and renowned seafood restaurants that tourists can take out time to visit. 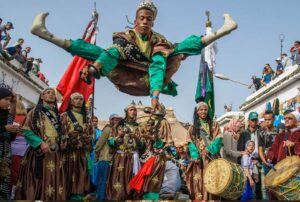 The African continent is home to more than 3000 ethnic groups and some 2000 different languages. It is, therefore, no surprise that the continent would be lit up with some pretty spectacular annual events and festivals. This is one of the beautiful things about Africa – the rich culture.